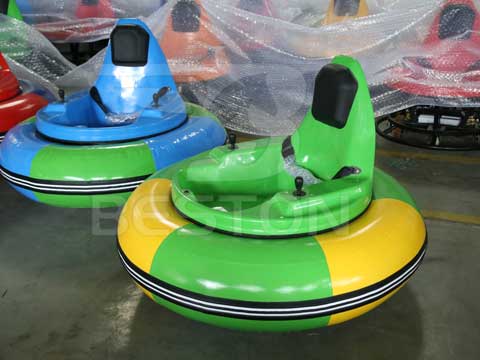 Bumper cars are a kind of motorized game facility. The equipment includes bumper cars and an indoor venue. The bumper car has an apron made of rubber around it. It usually has a maximum of two people on it, has pedals for acceleration, and a steering wheel. The bumper car body is generally made of FRP demolding. The reinforcing material in FRP is glass fiber. So what are the styles of bumper cars?

Ground network bumper car is a large bumper car suitable for use in squares or parks. It is suitable for two people. The power supply method is a steel plate conductive plate on the ground.

The power of the cartoon bumper car is a battery, with the appearance of a cartoon animal. It has a bear infested and bald head. It is very suitable to be placed on the mall square.

Frisbee bumper car is a bumper car that looks like a flying saucer. It has two handles to control the front, back, left and right.

The above are a few different bumper cars, so what are the differences between bumper cars? The difference between bumper cars is that the power supply and appearance are different. Others, such as glass fiber reinforced plastic, have remote control operations, and can be timed and lighted. There are many new styles of bumper cars. If you want to know more, you can contact Beston Team for more information!